In 1983, a few families got together and argued over who had the best Spiedie recipe in Binghamton. Spiedies are small pieces of marinated meat (lamb, chicken, pork or beef) that can be skewered and then grilled. To put an end to their friendly rivalry, they held the first Spiedie Fest Cooking Contests in 1983 and 1984. After a successful contest in 1984, a small committee formed and it was decided to create the first SpiedieFest and Balloon Rally at Otsiningo Park with about 5 hot air balloons, some local music and a small children’s area. The goal was simple, to host a safe, fun, affordable event in which our community would be proud. The first year had an attendance of approximately 4,000.

We now host what is considered one of the top hot air balloon rallies in the country drawing over 100,000 admissions each year. Our philosophy remains the same now as it was in 1984: provide a safe, fun and affordable weekend for our community.

In 2001, we were recognized by the Library of Congress with a Legacy Award and today a SpiedieFest display resides in the Library of Congress in Washington, D.C. The same year the festival was also recognized with an award from Syracuse Parks & Recreation as the Event of the Year for New York State. In 2005, the festival was named one of the 100 Destinations in the US by Destination Magazine. The Food Channel ran an episode on the SpiedieFest and Balloon Rally featuring the spiedie cooking contest and is still running today.

We have been named one of the top events by the Press & Sun Bulletin Readers’ Choice Awards every year since the contest began.

Since the inception of SpiedieFest, we have been able to donate over $1,000,000 to great organizations and causes right here in the Broome County area. We hope to continue this worthwhile tradition of entertainment and philanthropy for many years to come! Thank you to everyone who makes this possible. 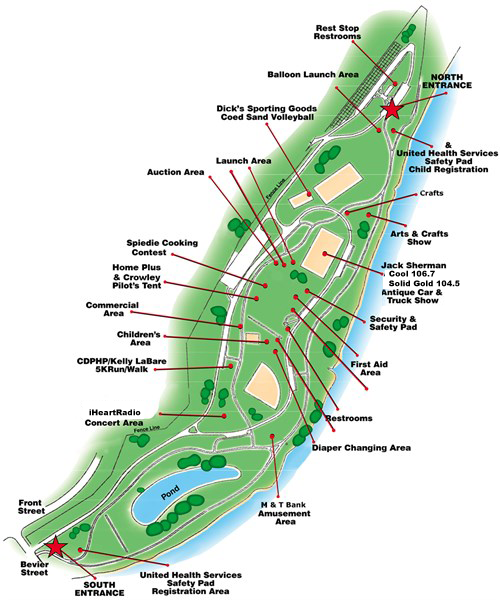 Note: Items on this map may be subject to change, and are meant as a general guide to the layout of the park.

Most attendees of SpiedieFest choose to get a SpiedieFest Ticket, which allows admission to the festival and all concerts throughout the weekend for one low price.

No tickets will be sold day of shows.

Daily admission does not include concert or meet and greet access. There is no pre-sale of walk-in admission – you only pay on arrival.

At a participating location in Binghamton

Parking for the festival is at Broome Community College (BCC) located on Front Street just north of Exit 5 off I-81.  Traffic can also access BCC from Exit 6 off I-81.

On-site parking is not available at Otsiningo Park.

Cost: $5.00 per vehicle which includes continual shuttle bus service from BCC to Otsiningo Park throughout the weekend as follows:

HANDICAPPED PARKING is available at BCC.

Motorists should be advised that the ramp from Route 11/Front Street accessing I-81 northbound (interchange 5) will be closed. The traveling public is advised to use interchanges 4 or 6 to access I-81 northbound.

Variable message boards will be placed on the major approaches to Ostiningo Park on I-81 (N&S) and I-88 (Westbound connector) advising motorists that no stopping or parking will be allowed along the shoulders of these major highways.

Please help us keep this family event safe for everyone.

Do you have a product that you would like to sell at SpiedieFest? Each year our festival brings tens of thousands of people to Binghamton over a three day weekend. We feature food, craft, and commercial vendors of all types.

There are three main vendor areas at the festival

To obtain a food permit the following must be done

All food service workers will need to complete the Temporary food service safety class and take the quiz located below.

The food service permit application needs to be submitted by the vendor along with the $50 permit fee. These items should be submitted as soon as possible after you have obtained a location through the Spiedie Fest coordinator. For further information or questions call the Broome county Health Department at (607) 778-2847.

Most years the vendor slots at the festival fill quickly – it is important to reserve your space early.

When you register as a vendor for the festival, you will be sent a vendor packet prior to the beginning of the festival that includes key information, passes for parking, and festival admission passes. Please keep these with you and in a safe place.

SpiedieFest has many sponsorship packages available. Some common sponsorships include:

Sponsorship packages vary, and can be worked out by talking directly with festival staff. Please contact us for more information.

If you SEE something, SAY something!

Broome County and the Spiedie Fest & Balloon Rally want to ensure a safe and enjoyable family friendly environment for everyone attending the festival.

Festival attendees are encouraged to report any inappropriate behavior to Festival Personnel or by calling 911.

We welcome your help in our efforts to provide an enjoyable experience for all guests!

Festival Sponsorship provided in part by: